Just had to show you these amazing old bars of soap I recently bought ... 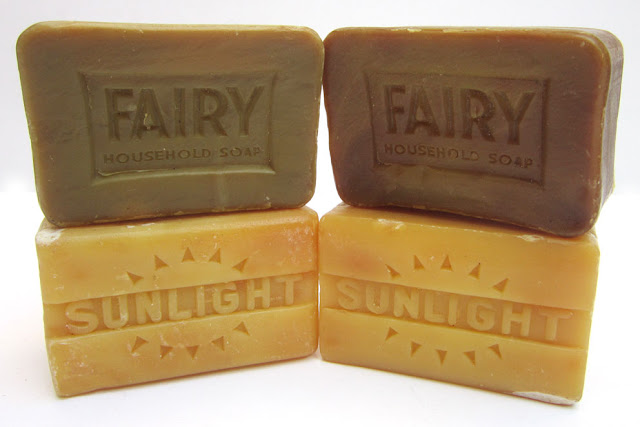 I love them as I'm always on the look-out for unusual and interesting vintage items.
Plus, how on earth were they never used and stayed in such good condition??!

As you can see, they are the iconic brands of FAIRY and SUNLIGHT. Classic British brands with long histories.


I was told when I bought them that they dated to the 1950s, but the Fairy soap bar could actually be a lot older. 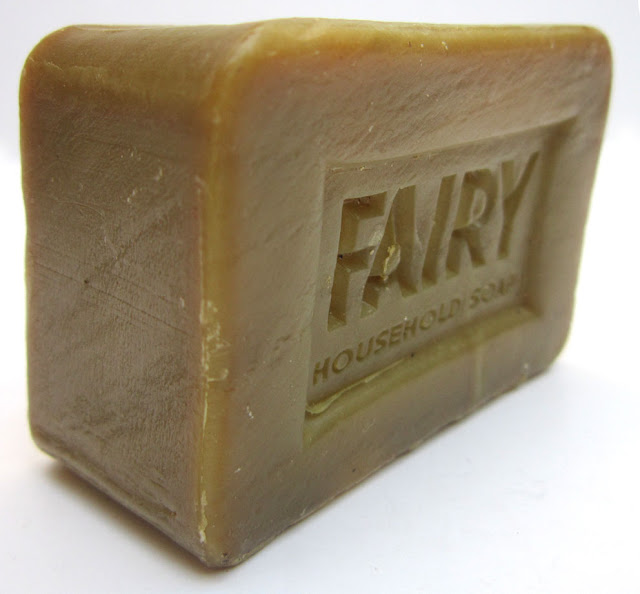 They still retain their distinctive green colour, and as they are the squared version with the wording HOUSEHOLD SOAP, are for 'laundry and other household purposes'.
The more traditional bars of soaps used for washing were rounded and weighed a bit less.

On the back is their famous baby logo, which is still in use throughout their products today, although they actually stopped making soap bars in 2009.
Underneath is the word 'HEDLEY'. 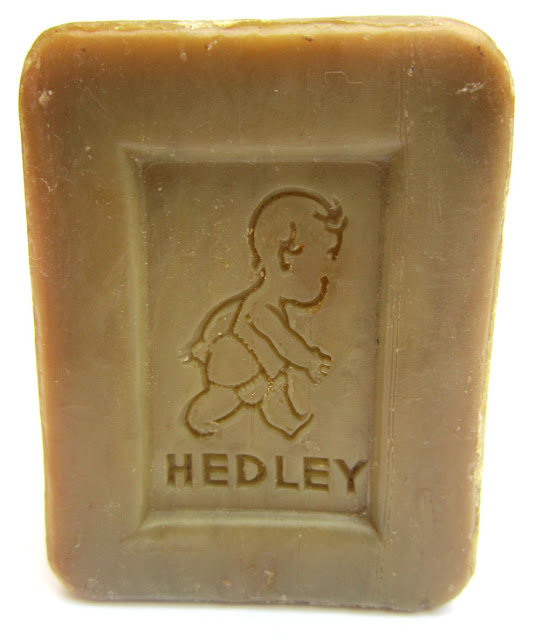 This refers to the original maker of Fairy soaps, Thomas Hedley Co., who first produced them in 1898.
However, in 1927 they were bought out by the current producers and holders of the brand, Proctor & Gamble, and went out of business in 1930.
So that must mean that my soaps would pre-date that 1927 takeover?
Or, for some reason, they just carried on putting the name Hedley on the bars even though they weren't around anymore. Which to be honest sounds a bit unlikely.

On the side they have individual serial numbers. 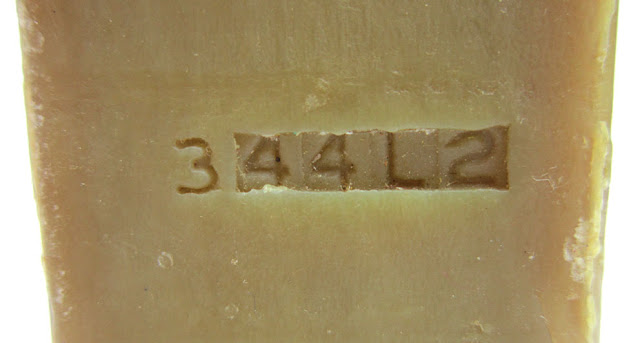 I would love to know what they correspond to, as it could possibly be a way of dating them more accurately.

The Sunlight soap has that brilliantly cheerful brand name on the front, all in that sunny yellow colour as well. 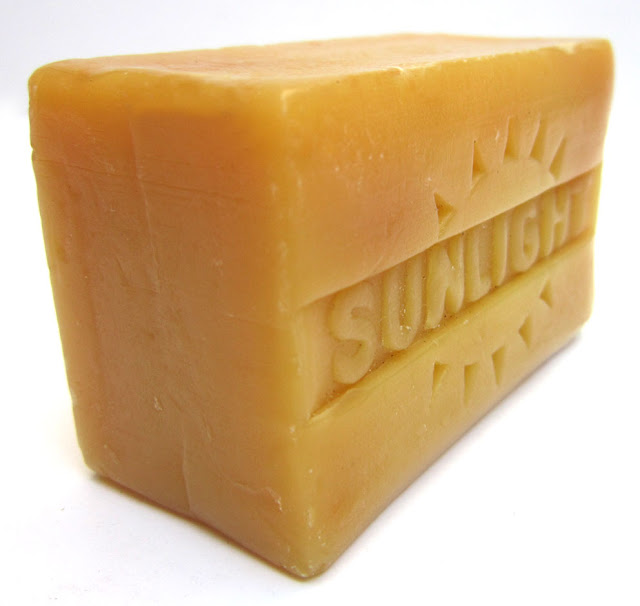 On the back we have ...
BY APPOINTMENT SOAPMAKERS
LEVER BROTHERS
PORT SUNLIGHT LIMITED 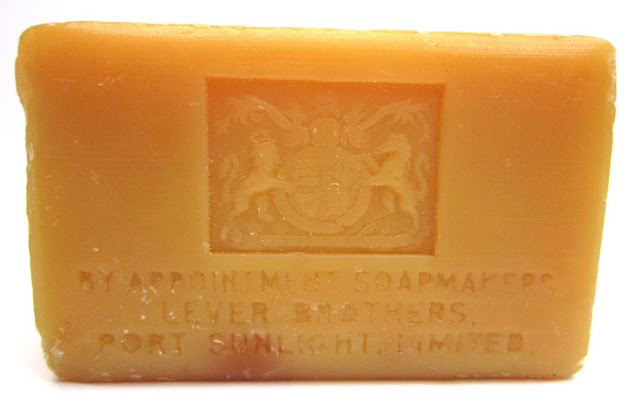 This gives you an insight into the iconic history of these bars, as Sunlight was first introduced by the Lever Brothers in 1884, making it the first packaged and branded soap in the world.

Port Sunlight is the extraordinary purpose built village, that was built by the brothers to house all the factories' workers, on the Wirral in Merseyside.
With stunning Victorian architecture, this must have been an absolute paradise for these people at the time. It stills looks sensational today, and has over 900 Grade II listed buildings.


As a little bonus, I've dug out these original late Victorian/Edwardian adverts for Sunlight Soap from the ArtPix Archives!!
I bought them yonks ago at Covent Garden Antiques Market.
They give you an idea of how they advertised their soaps in the early days. 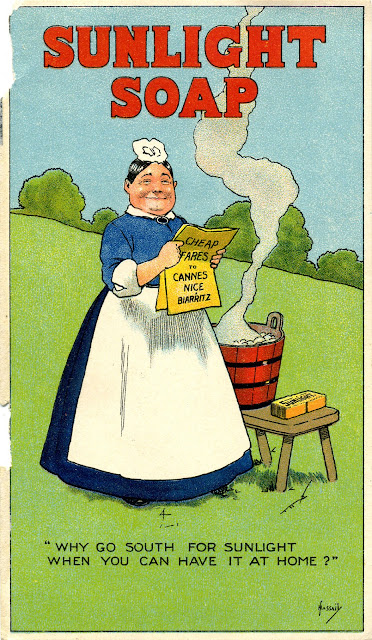 I seem to remember that the one below dates to 1913? 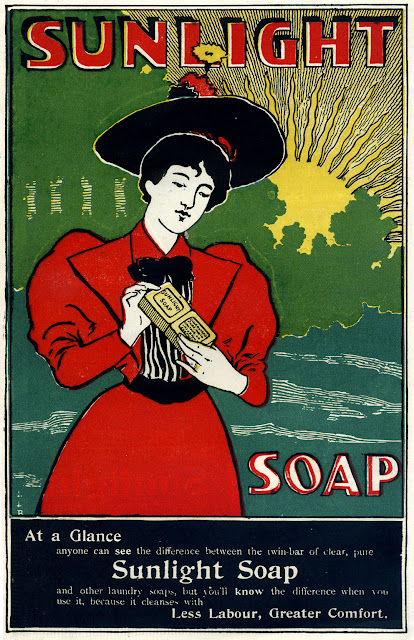 Keep in touch here for more news of unusual vintage bits and pieces!!
Posted by Matt ArtPix at 14:30