For what seems like ages ago now, I started up my very own digital magazine – ARTPIX. 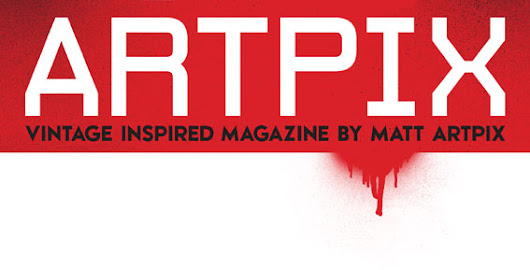 It all went very well, with Issue 1 coming out last year, with the promise of the next issue coming hot on its heels.

I began designing it, then ground to an almighty halt....

The ideas hadn't run out, just the confidence, and the fact its all a completely not-for-profit enterprise, so I have to be realistic and not prioritise it over other things.

Then it got completely forgotten about over the whole of the summer.

Only this week have I just started to tinker with it again, and realised I'd actually completed more than I thought.

As December and January are relatively quiet months for me, if I spend a bit of time on it, Issue 2 could come out very soon!!

I've put together a rough cover for this next issue, featuring the iconic 70s and 80s footballer Laurie Cunningham. 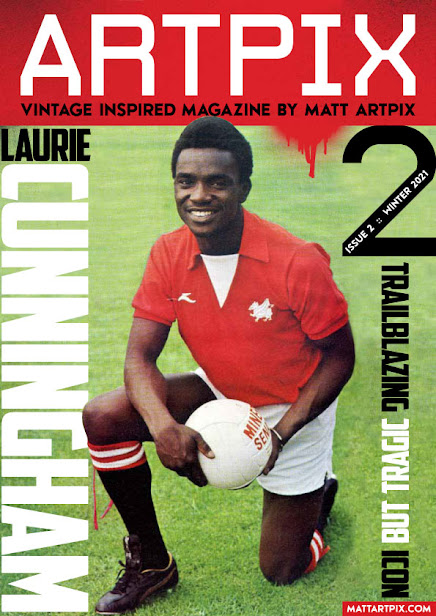 If you fancy having a look at the first issue of ARTPIX, then click HERE 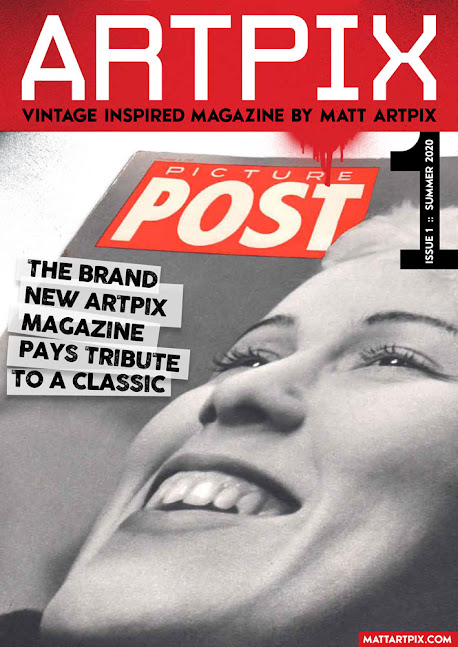 Here we are in December already... traditionally a pretty awful time for me sales wise!!!

But my unit at The Customs House in West Bay is still ticking over very nicely, and there has been a tiny revival of online sales, so you never know, it might be a good 'un.

Still not sure whether to do the next Giant Shepton Flea Market on December 12th though.

Is a massive risk with the weather doing absolutely anything at the moment – gales, showers, snow etc.

Plus being so close to Xmas, will there be any punters bothering to go? Oh, and of course ... another variant that wants to kill everyone.

Despite our lovely government (notice the lower case g, they aren't worthy of an upper case), saying "get your boosters now", I couldn't get an appointment until December 22nd. Cheers...

And in the meantime go and buy some of my stuff on Facebook, including this lovely vintage wooden toybox!!!! 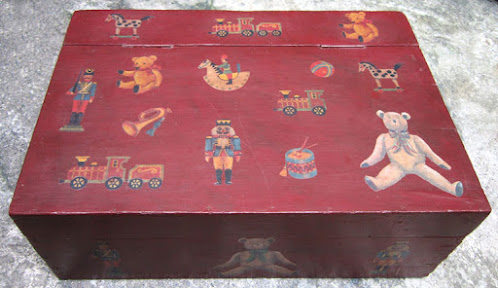 I absolutely love this!!!!

The lucky people of Cheltenham have a fabulous mural of the legendary Jaz Coleman!!
The composer extraordinaire, and singer from Killing Joke, has been honoured on his local patch by artist Andy Dice Davies.
In this rubbish world we live in, with corrupt politicians, uncontrollable virus, and mainstream culture rammed down your throats every single second, at last someone that is absolutely genuinely talented, individual and inspirational is right there in yer face!!!! 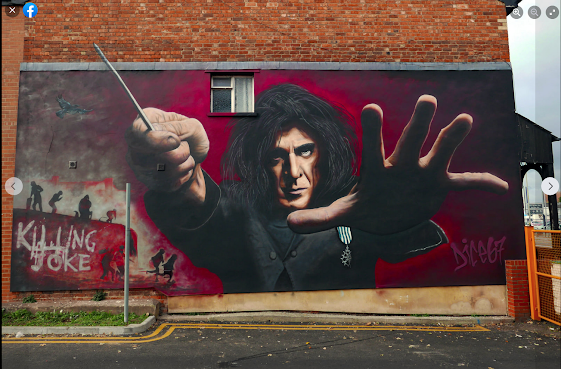 As a big storm approaches this weekend, why not have something that can create a storm whenever you want it?!

And here it is – a fantastically kitsch 1960s snow globe!! 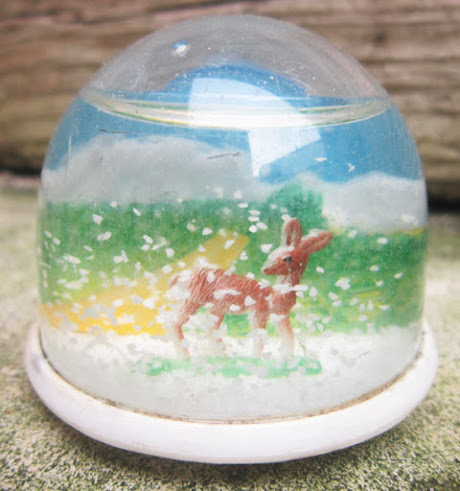 And lucky you, this one is on sale on the Facebook Marketplace right HERE

Have just completed two football collage artworks on A4 canvasses of Arsenal and West Ham! 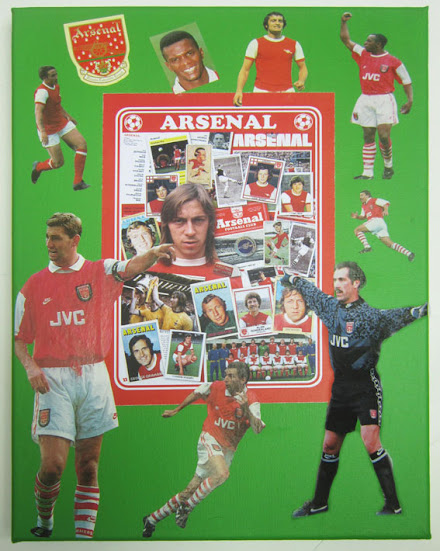 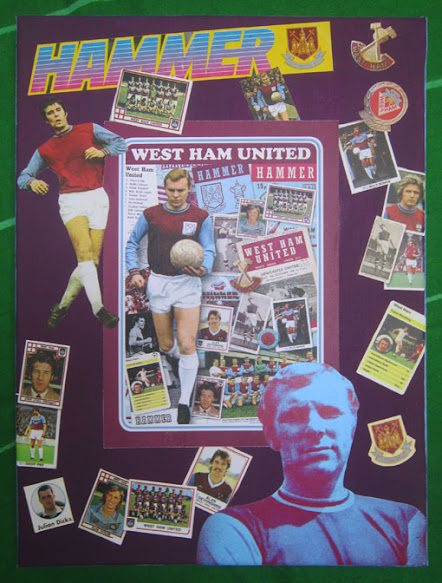 I've painted each canvas, and added a mixture of prints of my own designs and original vintage bits and pieces.

They are in my unit at The Customs House in West Bay, Dorset, so run along a get these unique, one-off canvasses.

They can hung up anywhere around the house, and would of course, dare I say it, make a great Xmas pressie for any Gunners or Hammers fan you happen to know!

By the way, the unit at The Customs House has been absolutely rocking this year!!

Retro and vintage football items, and my very own designs, have flown off the shelves.

Has been very important to me, as not only has it been a bit of money going into the ArtPix coffers, but as a confidence-booster after a pretty difficult year.

Vintage markets are still greatly reduced, and the ones going ahead are all outdoor, and have been a total lottery this year with the weather. Plus my online sales have plummeted in recent months, meaning my unit has been a life-saver!

So get down there and do some shopping!!!!

Don't forget, Saturday is the next Langport Vintage Market!!! 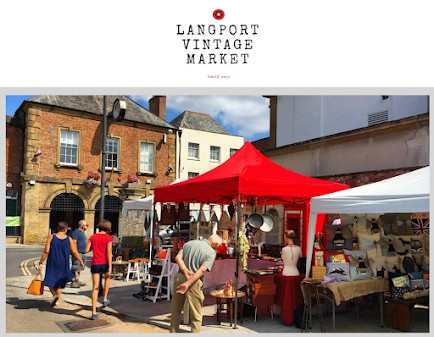 Langport is a lovely little town tucked away in the middle of gorgeous Somerset, so come along for a browse and some vintage shopping!!

Will be a great chance for some quirky and cool Christmas presents, including a very kitsch 60s deer snow globe which will be on my stall ... who wouldn't want one of those for Christmas??!! 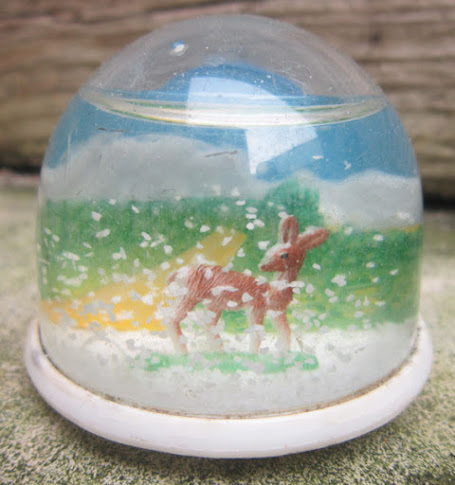 So run along to Langport on Saturday. 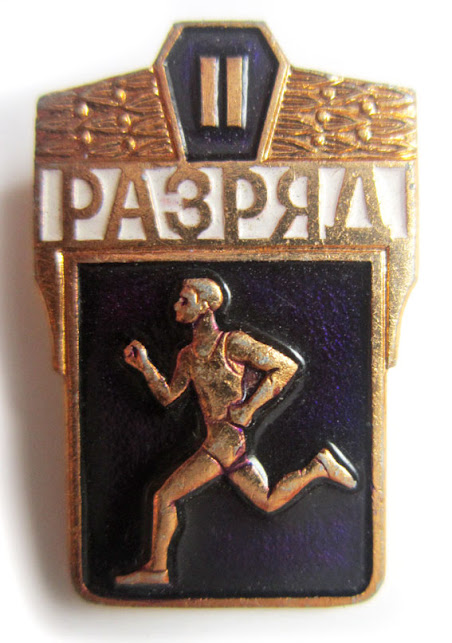 The lines are being blurred even more as the years pass as to what November 11th actually represents, but it should never be forgotten that it was end of the terrible conflict that was World War I.

For years the ArtPix clan had always thought that we were one of the rare, lucky families that hadn't lost anyone in that conflict.

Although I never knew them, both my Grandads served in WW1, and thankfully survived, and there were no family stories or legends concerning anyone lost.

However, since my sister started delving in the family history a few years ago, we are now starting to find out we weren't so lucky, having already found some casualties.

Only a couple of weeks ago she discovered, unknown to anyone in the family, of another one.

A distant cousin of mine, called Alfred Clark.

Although born and bred in London, like pretty much all my family, he served in the West Yorkshire Regiment (Prince of Wales Own), and died of wounds received on the Yser Canal on 27th January 1916. Age 21. He's buried at the Étaples Military Cemetery in France.

Yser is just north of the infamous town of Ypres in Belgium, and was the scene of a big battle in October 1914.

It would be possible to trace what he was doing, and where precisely where he was, in the Regimental diaries of the time.

The year, and the fact he was 21 when he died, meant he almost certainly volunteered in 1914 to fight. Conscription didn't kick in until 1916.

As he had been wounded, I presume he went down the line via the casualty clearing stations, eventually ending up at the vast British Army camp at Étaples in preparation for being shipped back to Blighty.

Sadly he never made it, and was buried at the huge cemetery there which has 11,517 graves.

The WW1 poet Wilfred Owen wrote an incredible few lines about the base camp at Étaples, known to the soldiers as 'Eat Apples'. Every British soldier would have passed through there on their way to the front line, and the sounds of the distant guns was just audible.

He noted the look on people's faces. He said that no painter could ever paint, or any actor could ever portray the expression that the soldiers who were heading to the front had. 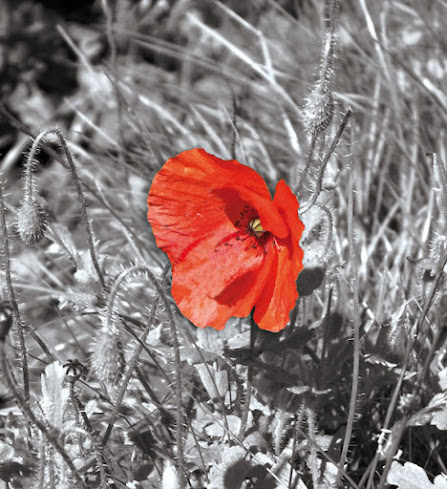