Have been out shopping again!!
Found some amazing, full on retro footie cards!

Produced by the legendary A & BC, these chewing gum cards take you right back to the late 60s and early 70s. Some immense names from footie's past are here.... Roger Hunt, Pat Jennings, Charlie George, Bobby Charlton, Kevin Keegan, Peter Bonetti, Bob Wilson to name a few!

I'm hoping to do some amazing things with these cards, in fact, I've already started with the collage down below! 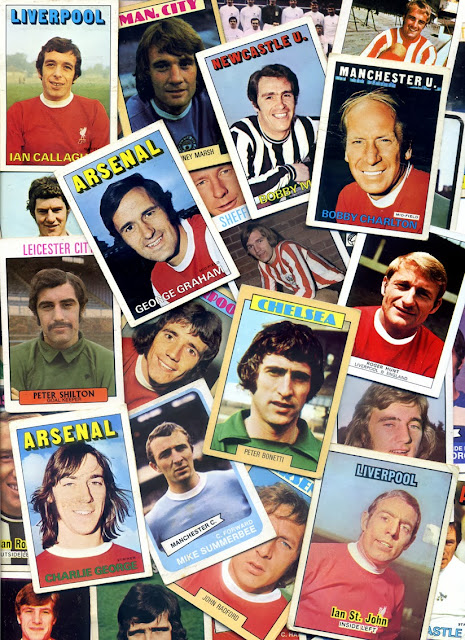 Talking of retro football, you can't get more retro than 1863......
I sauntered along to the British Library in London one lunchtime this week to have a look at the exhibition called Football Rules.
Although it's tiny, all contained in one glass cabinet, the centre piece of the exhibition is the stunning FA Minute Book taken from meetings which decided upon the rules of football. All meticulously written down by the brilliantly named Ebeneezer Cobb Morley in 1863, it's basically the most treasured footballing item anywhere in the world.

There is still time to have peep at it:
http://www.bl.uk/whatson/permgall/treasures/fa_minute_book/football.html

Wonderfully, sitting next to this was a copy of the CHELSEA INDEPENDENT....
The fantastic Chelsea fanzine of old. Still going today in a different guise as the CFCUK.
Along with Fulham and Preston fanzines, it was there to show the fans' own contribution to the football world. They had a copy from 1991, which seems a far off time now! The cover brilliantly illustrates Chelsea missing out on going to Wembley yet again!
The fanzine was a vital part of the club, always asking questions, funny and poignant stories of supporting the club and generally being the only real outlet for fans' frustrations before the internet.

Getting a fanzine outside Stamford Bridge has long been a ritual of mine, and the sounds of "Chelsea fanzine only a paarrnnd!" still ring out today.